Our economy would be even stronger than it currently is if we did a better job of allowing those individuals who are legal and are not bringing across the U.S. border prohibited items to enter our country more quickly than they do otherwise. This can be accomplished by reducing border wait times at U.S. ports of entry. The following table copied from the Customs and Border Protection website helps make my point that at some ports of entry, wait times are considered long. In many cases, they may also be unpredictable. 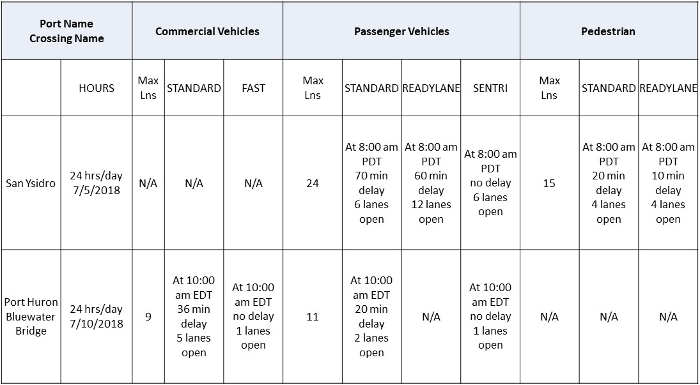 The delay is short for many individuals crossing the border between Mexico and the United States. But on July 5, 2018, at 8:00 AM PDT, vehicles in CBP Standard and Ready Lanes were waiting between 60 and 70 minutes. It does not matter what the temperature or environmental conditions were on that day (according to Yahoo Weather, the temperature was 75 degrees) because waiting this long is a disincentive for entering the United States.

Crossing into the United States along the northern border is generally a little better. On July 10, 2018, at 10:00 AM EDT, some commercial vehicles were waiting 36 minutes. Other passenger vehicles were waiting 20 minutes. This is a disincentive for entering the United States as well because the extra time adds to production costs in the supply chain (especially for those who rely on just-in-time delivery).

To be sure, both the private and public sectors are guilty of creating excessive “waits.” A doctor’s appointment, for example, that is scheduled for 4:00 PM but that doesn’t begin until after 5. If this happens too often, perhaps you end up finding a new doctor. But in the case of entering the United States, legal crossers have no alternative but to enter through ports of entry.

The disincentive is that waiting in line costs people money. Using a very simple example, if we assume that a person could earn $15 an hour, then the cost to that person is what they would have earned. In another example, if a person had the chance of vacationing an extra hour, then the cost of waiting in line would have been the lost vacation time. These costs, which also include added anxiety and reduced health, affect an individual’s willingness-to-cross. The alternative is to not make the trip, which is what some people do.

On a larger scale, economic studies on the cost of delays at the border are significant. A 2011 estimate on the cost of delays on the northern border was estimated to have been up to $30 billion. Regional estimates for Michigan/Ontario and San Diego/Tijuana have put the costs at $6.9 billion and $7.2 billion, respectively.

There are many ways to reduce border wait times. Steps that could be explored include:

These are just a few of the steps that could reduce the costs to industry of current delays and the opportunity that exists to enhance North American competitiveness.