Big Jump in Public Complaints to TSA Over Processing Times

Public complaints to the Transportation Security Administration (TSA) over processing times have been increasing since 2017. The data proves it.

The following chart shows TSA customer service statistics from October 2016 to May 2018. This information, which is reported monthly by TSA to the Department of Transportation, includes data on the number of travelers screened, baggage handled, courtesy complaints, screening procedures complaints, processing time complaints, and personal property complaints. 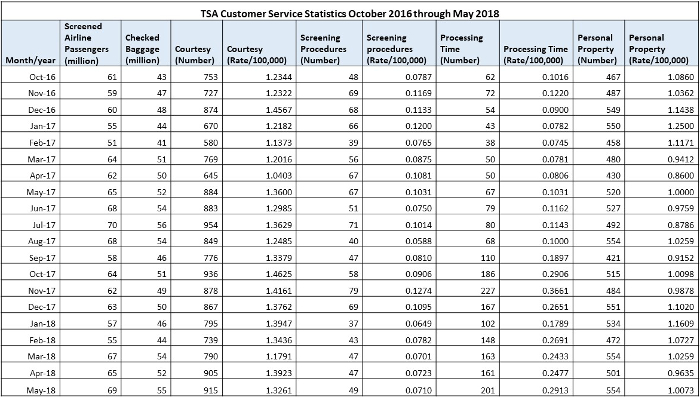 Looking to the data, processing times complaints have increased substantially. The number of complaints and the rates associated with those complaints varies from month to month for various reasons, such as seasonality. But the number of processing time complaints, and more importantly, the rates associated with those types of complaints, have increased from a low of 0.0745 complaints per 100,000 screened airline passengers in February 2017 to a high of 0.2931 complaints per 100,000 in May 2018. In this instance, the rate change is almost four times as high (0.2913/.0745=3.9100).

The overall issue of customer service has not gone unnoticed. In February 2018, Transportation and Protective Security Subcommittee Chairman John Katko (R-NY) said that TSA should “view the traveling public as partners in security, and leverage that partnership in a manner that is collaborative and positive,” adding that “TSA should be positive” and that “effective public engagement has a direct impact on security and TSA (sic) mission to protect transportation. “

Maybe that message was not clear. The following graph depicts the change in processing time complaints through May 2018, showing clearly how these types of complaints greatly increased, starting in September 2017. 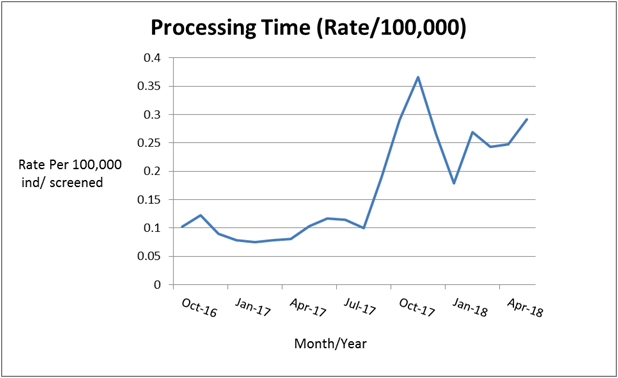 This increase might be the result of what Christine Griggs, Acting Assistant Administrator for TSA’s Office of Civil Rights and Liberties said during the same above-noted hearing, who stated that that TSA was using multiple mechanisms to provide feedback. In other words, she might be saying that TSA has made it easier to receive feedback from the customer base. Yet, she also stated that in FY 2017, the TSA Contact Center (TCC) experienced a 14% decrease in the rate of complaints, despite a 3% increase in passenger throughput.

It seems that the improved ability to provide feedback to the TCC should be positively or directly correlated with an increase in the complaint rate, but that is not the case (according to her statement). In other words, when the ability to complain increases then the data base should show a higher complaint rate across all categories. However, only the processing time complaint rate increased a substantial amount.

From a policy perspective, TSA should review the processing time complaint rates from September 2017 and identify the variables that caused this rate to increase. Following the analysis, TSA should consider doing a better job of managing from the data.