Adm. Neffenger Says Goodbye in his Own Humble Way 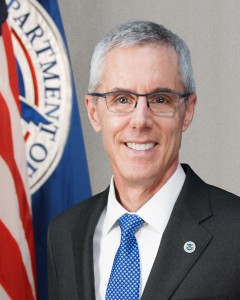 As the news began to trickle out of Pentagon City, a sense of melancholy took hold of me. I had hoped that the brain trust in the personnel office of the Trump transition team would see the wisdom and benefit of asking Peter Neffenger to stay on as Administrator of the Transportation Security Administration (TSA). Alas, since the call did not occur, Peter Neffenger said his goodbyes last Friday afternoon at TSA headquarters in a low-key, employee-only event.

I’m told it was exactly how he wanted it – no fanfare, no pomp and circumstance, no long tributes or slide shows, and certainly no “change of command” ceremony atmosphere. Just a few colleagues who could stand around and wish each other, as old mariners are wont to say, “fair winds and following seas” as their tenure at TSA came to an end. There were no outsiders invited. Just a small gathering of TSA employees who had bought into Neffenger’s vision of what TSA could become and who came through the crucible of TSA’s high-stress environment having made the agency better and more effective.

Peter Neffenger, a retired Coast Guard Admiral, might have seemed an unusual choice to lead TSA back in June 2015, when he was asked to take over a workforce of nearly 60,000 and a mission that is not judged by its successes. He had no real previous aviation background and was all but unknown to most of the TSA stakeholder community. But if the past 18 months have proved anything at all, it is that he was exactly the right choice at the right time. Neffenger understood people; he understood mission execution; and he understood that rhetorical platitudes were not enough to affect the culture of an organization that was broken—more privately than publicly, to be sure, but broken nonetheless. And he set out to lead the agency out of its almost self-manufactured doldrums.

Right after Neffenger started, the story leaked about the Inspector General’s staff having been able to get prohibited items past TSA checkpoints. TSA’s public image was about as bad as it had been since the agency was created. Instead of looking at the problem as a way to place blame (which is something folks on Capitol Hill never quite “get”), Neffenger saw an opportunity to address root causes of the problems he confronted. The result was the creation of a training academy at the Federal Law Enforcement Training Center at Glynco, Georgia, where TSA implemented a thorough training/re-training program for every frontline employee and for headquarters staff. Neffenger and his leadership team also, in the heat of the “long lines” at TSA checkpoints crisis, created an operations center that would know day-by-day, hour-by-hour what was going on at major airports across the United States. The Boston Globe recently did a magazine story detailing how Neffenger led the TSA team to overcome the operational challenge and turn a negative press narrative into a positive storyline.

It would be easy to focus on the things that need further work, but we all are works in progress and could benefit from improvements in multiple areas. TSA is no exception to that general observation. And if Neffenger had been asked to stay on, I have no doubt that he would have continued to chip away at the list of things that need improvement while, at the same time, rekindling the mission-focused, security and customer service culture within the agency that had been buried by bureaucracy and petty personality disputes for far too long. While I wish it were not true, someone else will have to pick up that responsibility now.

As I write this, accolades from within DHS, the private sector and Capitol Hill are beginning to flow in praising the work Neffenger has accomplished in his too-short tenure at TSA. As well they should. Being TSA Administrator is a difficult job under the best of circumstances, and not one TSA Administrator yet has had the benefit of working in a “best of circumstances” environment. Yet, Neffenger led the agency through some very tough times, and it is a far better place for his leadership efforts. He did not do it through flowery talks; rather, he “walked the walk” by emphasizing that TSA’s people were (and are) its most valuable assets. Neffenger fought to get money and time to invest in them, and it became his first and highest priority. And he viewed the private sector stakeholders as his partners, not just entities that TSA could regulate.

There is no doubt that Neffenger has a servant’s heart and sees public service as a noble calling. He showed us—through his humility, common sense and genuine care for “his” people—that a team of dedicated people can truly make a difference. America is better for his willingness to serve as he has done. He will be greatly missed, and his legacy will gain appreciation and our gratitude in the years to come.

Admiral Neffenger, may you always have “fair winds and following seas.”