Over the past several months, I have seen statistics showing that people are complaining more and more about wait times at airport security checkpoints. The media has brought increased attention to the fact that our airport security system needs an overhaul. One would think that if we really dislike waiting, blame TSA entirely for the problem and truly want to fix the problem, it couldn’t be simpler than swapping TSA-employed airport screeners for private sector contractors.

I say that because I am a strong believer in competition, even in the area of security screening. I love the idea of having a rivalry between firms trying to achieve goals like maximizing homeland security while reducing wait times by varying the elements that can be managed.

Then I saw an article quoting Jeff Holmgren, the TSA federal security director at the Seattle airport, telling the Commissioners at the Port of Seattle that “there is no statistical difference in terms of effectiveness or efficiency” between federal and private screeners. That’s the official position of TSA, which argues that there is no correlation between security wait times and the use of federal or contracted screeners.

I couldn’t believe what I was reading; more research was needed. The table below shows customer service complaint rates for 30 large U.S. airports across the nation. Aside from Charlotte Douglas International Airport (CLT), which is comparable, San Francisco International Airport (SFO) has the lowest average number of complaints (2.72 per 100,000 enplanements + .75) and almost the lowest standard deviation. The major difference between all of these airports is that San Francisco International (SFO) uses Covenant Aviation Security (CAS) and the others do not. CAS is a private company under contract with the federal government to provide passenger and baggage screening at SFO. CAS also has a web page that has been set up for those who want to provide compliments or complaints.

My argument, that private sector screeners deliver better customer service, was becoming too easy. I suspected, however, that some people might be providing feedback to TSA and others might be providing it to CAS. Therefore, it was important to make sure that there was no double-counting or under-counting.

And this is where things got very interesting. I reached out to both CAS and TSA, and there was evident confusion. TSA said they did not receive data from CAS. CAS said they do not send data to TSA. This merits further investigation because the compliment/complaint data on CAS operations at SFO is critical to assessing whether using a private contractor improves, maintains or degrades the customer service and throughput at airport security checkpoints.

At this time, I cannot conclusively say whether Jeff Holmgren was right. But we’re going to fix that in two ways. First, we are going to make a FOIA request to TSA for all customer service complaint and compliment data—whether it has been collected by TSA or by CAS. Our hope is that this will break the logjam associated with who has what data and that TSA will provide us with all of the data from both databases. 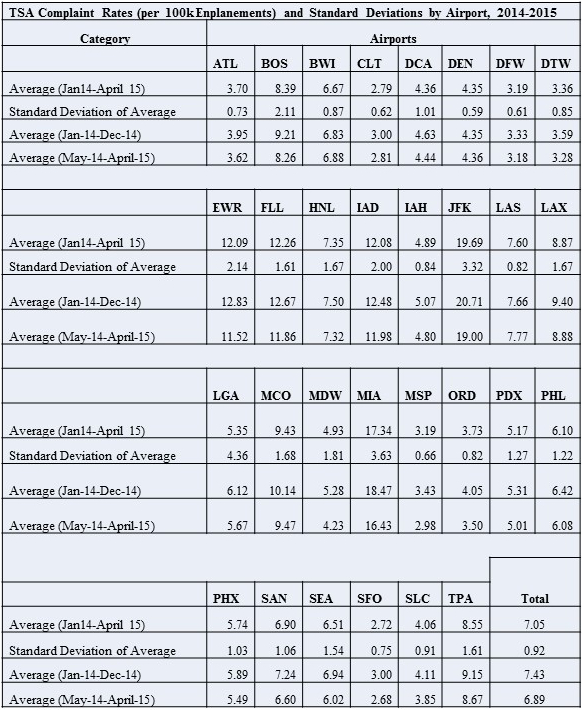