Security Mom Explains Security in a Way We Can All Understand 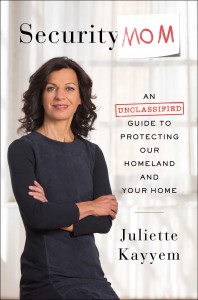 Juliette Kayyem’s new book, Security Mom, may be the most honest book I’ve read on how homeland security affects families and the communities in which we live. More importantly, it helps us understand, and explain to our family members, neighbors, and friends what it really means to live in a dangerous, high-threat environment without sacrificing our values or cowering in fear.

More autobiography than academic textbook, Kayyem traces her own journey from being an enthusiastic young lawyer addressing inequities in the workplace from a position at DOJ to becoming an expert on counterterrorism, emergency preparedness and community resiliency. Her career has included serving as: a member of the National Commission on Terrorism in 1999 (the Bremer Commission); the Massachusetts Homeland Security Director; the DHS head of Intergovernmental Affairs; and a Pulitzer Prize-nominated writer for the Boston Globe. She founded Kayyem Solutions, a homeland security consultancy, and also serves as an expert commentator on CNN, WGBH and has a weekly Podcast, also called “Security Mom,” where she interviews government and private sector officials about how to bring homeland security policy and procedures down to a practical, family-level discussion.

The book starts with Kayyem’s up-close and highly personal reflections as her vehicle was passed by law enforcement officials chasing the Boston Marathon bombers. As she noted, the Tsarnaev brothers lived in her Cambridge, Mass., neighborhood. They probably shopped at the same stores. Her children likely met them on the neighborhood streets and passed them on the sidewalks.

She then reflects on all of her personal and professional experiences that led her to that particular time and place, where her calming presence on local, national and international media helped keep things in its proper perspective, thereby driving greater situational awareness, community safety and channeling frustration into the “Boston Strong” culture. She talks about her family, growing up in Los Angeles in a family whose ancestors survived a rigorous immigrant journey.

Although an expert on counterterrorism, she points out that homeland security is more than just chasing bad people who want to do bad things. As an all-hazards agency, making the right call on when to close streets, declare a snow day or otherwise disrupting people’s routines is not an easy task. Sometimes there are no “right” answers – just answers where the risks are better known.

She writes openly and candidly about the emotional conflicts she experienced in making difficult choices meshing her professional training and her desire to comfort and protect her children – something with which almost every parent can identify. In one chapter, she discusses the incredible responsibility she undertook in being a key leader in DHS’ response to the Deepwater Horizon oil well blowout in the Gulf of Mexico, trying to manage public expectations, presidential-level communications, mediating among environmental experts, and being cognizant of the state-level concerns of a couple of governors (almost all of whom were politically opposed to the main policies of the Obama Administration.)

While leading a daily 9:15 AM (often quite intense) conference call with “stakeholders,” and while listening to an update from the National Weather Service, Kayyem’s youngest son, Jeremiah, lost one of his shoes. Forgetting that she had not placed her phone on mute, she posed the motherly question: “How the hell do you lose your Croc between the kitchen and the front door?” After a few moments of silence Mississippi Governor Haley Barbour said: “Seems like we have a bigger mess than this spill, don’t we now?” Everyone laughed, except Kayyem.

It was the perfect example of how Kayyem refuses to put family on one side and profession on the other side of a teeter-totter and attempt to balance them. Instead she dumps them all into a gigantic bucket and merges, meshes and stirs them in a way that is helpful to families of all sizes and ages. Security cannot be separate from our daily lives; it must be integrated into every part of it.

In another chapter, Kayyem talks about the incredible difficulty in getting families of children who were in the same pre-school group as her children to take preparation for a disaster situation seriously. Even well-educated, middle and upper class families often believe that being prepared for “bad days” is something too scary to talk about with children; that bad events happen in other places to people who are not “like us;” that discussion of low probability/high consequence events are largely the province of political, conspiracy theory driven “wing-nuts” and media commentators intent on selling newspapers or driving television ratings. As Kayyem phrased it, they “had divided the home from the homeland.”

According to Kayyem, her definition of a security mom is that her “love for my children doesn’t stop at my front door.” Security and safety are obligations that belong to more than just the Department of Homeland Security or other federal agencies. The key to security and resiliency is preparation, she says. As she writes:

“We don’t need to live in fear of catastrophic disaster striking at any time. Preparedness means taking responsibility in the event that it might happen. When more people are prepared, fewer people will need help. That will minimize the possibility of greater catastrophe.”

“The burden of safety belongs to all of us. We need to know that we will survive and even bounce back as a nation and as individuals. There will be other attacks, or hurricanes, or oil spills, or earthquakes, any number of unpredictable events that will put citizens at risk or, worse – as we learned after Adam Lanza shot twenty children at Connecticut’s Sandy Hook Elementary School in 2012 – our children in harm’s way.

“As we have seen over and over again, “Never Again” and “Keep Calm” are futile ways to look at the world, damaging ways to look at a democracy, and passive ways to view a citizen’s own responsibility…. Bad things happen, and they will happen again. Here will be organized terrorists; summer hurricanes and winter storms; anthrax scares and deadly pandemics; a television network’s negligence and a would-be reality star’s arrogance; abandoned children in distant lands and massive oil spills in nearby waters.

“And there is a great, great deal each of us can do to make sure that we regain our momentum as soon and as successfully as possible. We have to see ourselves as a collection of resources that can be harnessed for our own safety and security.”

For anyone who has listened to Juliette Kayyem in person or through a media broadcast, you will immediately recognize her writing style in Security Mom. It is energetic, factually informed, highly rational, usefully practical and very fast-paced. It explains why she is so frequently asked: “What should we do?” And while she admits that she is reluctant to answer that question, what she writes is that we cannot prevent all bad things from happening, but we can be far better prepared when something does.

We can acknowledge our fears, our desires to protect family, and our emotional need for safety in a world where American values are under assault by forces with a very different set of values. What we need, she says, is a nation filled with “Security Moms.”

I submit that what she advocates in her book is more than that. She makes the case that we need security-aware, well-prepared families. Understanding that message makes the book an informative—as well as entertaining—“must read” for those who believe in individual responsibility, community response and resilience—and frankly for everyone else, too.